Collaborative Filtering is the most common technique used when it comes to building intelligent recommender systems that can learn to give better recommendations as more information about users is collected.

Most websites like Amazon, YouTube, and Netflix use collaborative filtering as a part of their sophisticated recommendation systems. You can use this technique to build recommenders that give suggestions to a user on the basis of the likes and dislikes of similar users.

In this article, you’ll learn about:

Free Bonus: Click here to get access to a chapter from Python Tricks: The Book that shows you Python's best practices with simple examples you can apply instantly to write more beautiful + Pythonic code.

What Is Collaborative Filtering?

Collaborative filtering is a technique that can filter out items that a user might like on the basis of reactions by similar users.

It works by searching a large group of people and finding a smaller set of users with tastes similar to a particular user. It looks at the items they like and combines them to create a ranked list of suggestions.

There are many ways to decide which users are similar and combine their choices to create a list of recommendations. This article will show you how to do that with Python.

To experiment with recommendation algorithms, you’ll need data that contains a set of items and a set of users who have reacted to some of the items.

The reaction can be explicit (rating on a scale of 1 to 5, likes or dislikes) or implicit (viewing an item, adding it to a wish list, the time spent on an article).

The matrix shows five users who have rated some of the items on a scale of 1 to 5. For example, the first user has given a rating 4 to the third item.

In most cases, the cells in the matrix are empty, as users only rate a few items. It’s highly unlikely for every user to rate or react to every item available. A matrix with mostly empty cells is called sparse, and the opposite to that (a mostly filled matrix) is called dense.

There are a lot of datasets that have been collected and made available to the public for research and benchmarking. Here’s a list of high-quality data sources that you can choose from.

The best one to get started would be the MovieLens dataset collected by GroupLens Research. In particular, the MovieLens 100k dataset is a stable benchmark dataset with 100,000 ratings given by 943 users for 1682 movies, with each user having rated at least 20 movies.

This dataset consists of many files that contain information about the movies, the users, and the ratings given by users to the movies they have watched. The ones that are of interest are the following:

The file u.data that contains the ratings is a tab separated list of user ID, item ID, rating, and timestamp. The first few lines of the file look like this:

As shown above, the file tells what rating a user gave to a particular movie. This file contains 100,000 such ratings, which will be used to predict the ratings of the movies not seen by the users.

To build a system that can automatically recommend items to users based on the preferences of other users, the first step is to find similar users or items. The second step is to predict the ratings of the items that are not yet rated by a user. So, you will need the answers to these questions:

The first two questions don’t have single answers. Collaborative filtering is a family of algorithms where there are multiple ways to find similar users or items and multiple ways to calculate rating based on ratings of similar users. Depending on the choices you make, you end up with a type of collaborative filtering approach. You’ll get to see the various approaches to find similarity and predict ratings in this article.

One important thing to keep in mind is that in an approach based purely on collaborative filtering, the similarity is not calculated using factors like the age of users, genre of the movie, or any other data about users or items. It is calculated only on the basis of the rating (explicit or implicit) a user gives to an item. For example, two users can be considered similar if they give the same ratings to ten movies despite there being a big difference in their age.

The third question for how to measure the accuracy of your predictions also has multiple answers, which include error calculation techniques that can be used in many places and not just recommenders based on collaborative filtering.

One of the approaches to measure the accuracy of your result is the Root Mean Square Error (RMSE), in which you predict ratings for a test dataset of user-item pairs whose rating values are already known. The difference between the known value and the predicted value would be the error. Square all the error values for the test set, find the average (or mean), and then take the square root of that average to get the RMSE.

Another metric to measure the accuracy is Mean Absolute Error (MAE), in which you find the magnitude of error by finding its absolute value and then taking the average of all error values.

You don’t need to worry about the details of RMSE or MAE at this point as they are readily available as part of various packages in Python, and you will see them later in the article.

Now let’s look at the different types of algorithms in the family of collaborative filtering.

The first category includes algorithms that are memory based, in which statistical techniques are applied to the entire dataset to calculate the predictions.

To find the rating R that a user U would give to an item I, the approach includes:

You’ll see each of them in detail in the following sections.

How to Find Similar Users on the Basis of Ratings

To understand the concept of similarity, let’s create a simple dataset first.

The data includes four users A, B, C, and D, who have rated two movies. The ratings are stored in lists, and each list contains two numbers indicating the rating of each movie:

To start off with a visual clue, plot the ratings of two movies given by the users on a graph and look for a pattern. The graph looks like this: 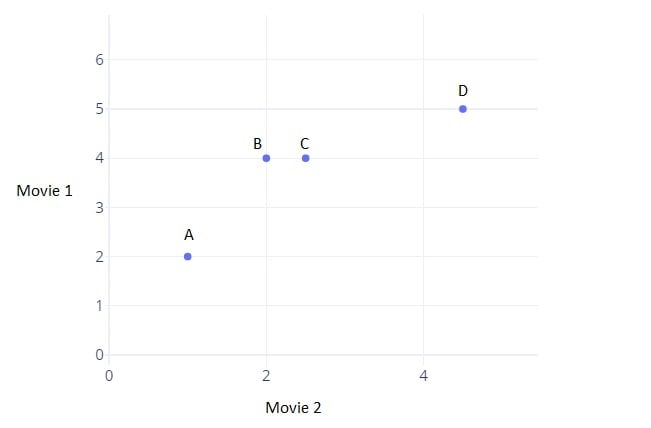 In the graph above, each point represents a user and is plotted against the ratings they gave to two movies.