Heaps and priority queues are little-known but surprisingly useful data structures. For many problems that involve finding the best element in a dataset, they offer a solution that’s easy to use and highly effective. The Python heapq module is part of the standard library. It implements all the low-level heap operations as well as some high-level common uses for heaps.

A priority queue is a powerful tool that can solve problems as varied as writing an email scheduler, finding the shortest path on a map, or merging log files. Programming is full of optimization problems in which the goal is to find the best element. Priority queues and the functions in the Python heapq module can often help with that.

In this tutorial, you’ll learn:

This tutorial is for Pythonistas who are comfortable with lists, dicts, sets, and generators and are looking for more sophisticated data structures.

Free Download: Get a sample chapter from Python Tricks: The Book that shows you Python's best practices with simple examples you can apply instantly to write more beautiful + Pythonic code.

Priority queues are commonly used for optimizing task execution, in which the goal is to work on the task with the highest priority. After a task is completed, its priority is lowered, and it’s returned to the queue.

There are two different conventions for determining the priority of an element:

These two conventions are equivalent because you can always reverse the effective order. For example, if your elements consist of numbers, then using negative numbers will flip the conventions around.

The Python heapq module uses the second convention, which is generally the more common of the two. Under this convention, the smallest element has the highest priority. This might sound surprising, but it’s often quite useful. In the real-life examples you’ll see later, this convention will simplify your code.

Note: The Python heapq module, and the heap data structure in general, is not designed to allow finding any element except the smallest one. For retrieval of any element by size, a better option is a binary search tree.

The heap implementation of the priority queue guarantees that both pushing (adding) and popping (removing) elements are logarithmic time operations. This means that the time it takes to do push and pop is proportional to the base-2 logarithm of the number of elements.

In any discussion of performance, the biggest caveat is that these abstract considerations are less meaningful than actually measuring a concrete program and learning where the bottlenecks are. General performance guarantees are still important for making useful predictions about program behavior, but those predictions should be confirmed.

The completeness property means that the depth of the tree is the base-2 logarithm of the number of elements, rounded up. Here’s an example of a complete binary tree: 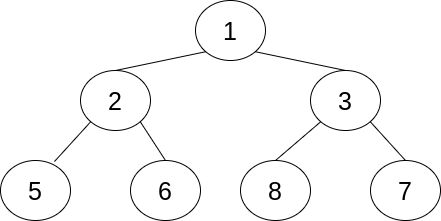 In this particular example, all levels are complete. Each node except for the deepest ones has exactly two children. There are a total of seven nodes in three levels. Three is the base-2 logarithm of seven, rounded up.

The single node at the base level is called the root node. It might seem weird to call the node at the top of the tree the root, but this is the common convention in programming and computer science.

The performance guarantees in a heap depend on how elements percolate up and down the tree. The practical result of this is that the number of comparisons in a heap is the base-2 logarithm of the size of the tree.

In a heap tree, the value in a node is always smaller than both of its children. This is called the heap property. This is different from a binary search tree, in which only the left node will be smaller than the value of its parent.

Another task for which you could use a priority queue is scheduling emails. Imagine a system that has several kinds of emails, each of which needs to be sent at a certain frequency. One kind of email needs to go out every fifteen minutes, and another needs to be sent every forty minutes.

A scheduler could add both types of email to the queue with a timestamp indicating when the email next needs to be sent. Then the scheduler could look at the element with the smallest timestamp—indicating that it’s next in line to be sent—and calculate how long to sleep before sending.

When the scheduler wakes up, it would process the relevant email, take the email out of the priority queue, calculate the next timestamp, and put the email back in the queue at the correct location.

Heaps as Lists in the Python heapq Module

Although you saw the heap described earlier as a tree, it’s important to remember that it’s a complete binary tree. Completeness means that it’s always possible to tell how many elements are at each layer except the last one. Because of this, heaps can be implemented as a list. This is what the Python heapq module does.

There are three rules that determine the relationship between the element at the index k and its surrounding elements:

Note: The // symbol is the integer division operator. It always rounds down to an integer.

The heap property means that if h is a heap, then the following will never be False:

It might raise an IndexError if any of the indices is beyond the length of the list, but it will never be False.

Here’s a visual of a list that satisfies the heap property:

The arrows go from element k to elements 2*k + 1 and 2*k + 2. For example, the first element in a Python list has the index 0, so its two arrows point at indices 1 and 2. Notice how the arrows always go from a smaller value to a bigger value. This is how you can check that the list satisfies the heap property.

Usually, as in the email example above, elements will be inserted into a heap one by one, starting with an empty heap. However, if there’s already a list of elements that needs to be a heap, then the Python heapq module includes heapify() for turning a list into a valid heap.

The following code uses heapify() to turn a into a heap.